THE HOUSE ON THE BORDERLAND by Corben and Revelstroke

It is a source of constant amazement to me that more of William Hope Hodgson’s works have not been adapted into comic or graphic novel format.  It would seem that many of his stories would fit perfectly with such a visual medium.  Consider the sea creatures of WHH’s “Sargasso Sea” stories or the supernatural cases of Carnacki.  The amount of action in all of these would be perfect for such adaptations and far more so than Lovecraft has been, to my thinking.

And yet, to my knowledge, there has only been one comic format adaptation of Hodgson.  That is Vertigo Comics 2000 publication of The House on the Borderland adapted by Richard Corben and Simon Revelstroke.  Vertigo, an imprint of DC Comics, has a long and illustrious history as a publisher of horror and cutting edge comics.  When I first heard of this book, I was quite excited!  I’d been a fan of Corben’s work since his days in the old Warren magazines of Creepy and Eerie so I knew that, artistically, he would be a good match for the material.

Unfortunately, what was eventually published bore little resemblance to the original novel by WHH.  If anything, I would not consider this to be an ‘adaptation’ in so much as it is a ‘re-interpretation’.  It takes WHH’s novel more as an inspiration than a literal script.

Nowhere is this more evident than in the inclusion of a ‘framing sequence’ meant to give the story more of a “contemporary vein”.  In it, two hikers discover the manuscript that forms Hodgson’s original novel while being chased by a group of irate Irishmen.  Later, at the end, Corben and Revelstroke use the framing sequence as a way of not only lending credence to the events detailed in the journal but also for their own speculations and attempts to ‘explain’ the meaning of the novel.  This is both unnecessary and pointless and adds little to the overall impact of the book.  I would have rather that they had spent more pages on the adaptation than indulge in this extraneous addition.

This is probably the weakest aspect of the book in that Corben and Revelstroke have excised large portions of the novel.  Most conspicuous is the section where the narrator’s mind travels across a plain of desolate loneliness into a valley of murderous gods in half-slumber.  Overall, this part seems to have fallen victim to Corben & Revelstroke’s concept of what is truly important in the novel: the swine-creatures.

Even in this aspect, there is little resemblance to Hodgson’s novel.  Where WHH had his narrator engage in an almost placid defense of his house and sister, Corben & Revelstroke re-imagine it into a multi-page siege sequence complete with rapidly fired guns and an attempt by the swine-creatures to rape the narrator’s sister.

Sexual themes in the novel have been suggested and examined before.  A most notable example is Iain Sinclair’s afterword to a later printing of the novel entitled “An Aberrant Afterword: Blowing Dust in the House of Incest”.  However, Corben & Revelstroke remove all pretense in their version with the narrator’s sister making an overt attempt to seduce him.  In this adaptation, this is representation of the sister’s descent into degeneration caused by the attack from the swine-creatures but it remains jarring nonetheless. 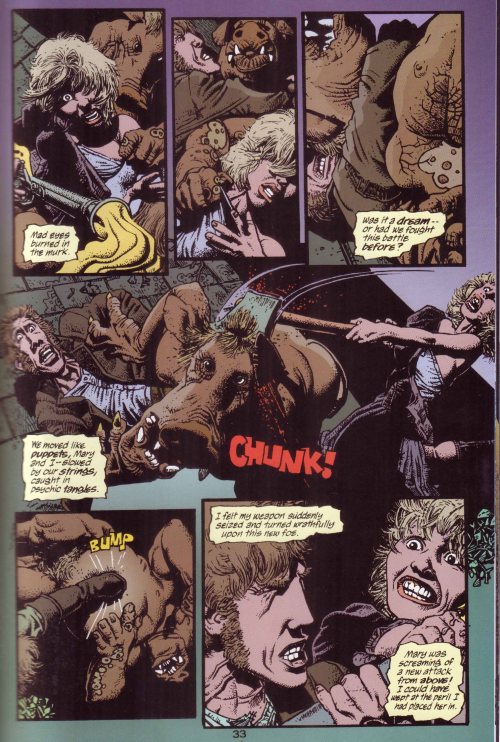 Such wild excesses are to be expected with Corben whose own adaptations of Poe stories have often contained naked women and inexplicable sex scenes.  But, on the whole, they do not ring true in a Hodgson story.

In many ways, this adaptation confuses me.  If it were meant to appeal to fans of Hodgson, those readers will be, at best, disappointed and, at worst, very angry.  If it was hoped to bring more fans to Hodgson’s own writings, this again is baffling as those who expect WHH’s work to be like this will inevitably be unsatisfied.

This book works best if you are able to completely separate it from the original novel.  If you can do this, it is actually a very enjoyable graphic novel with much to commend it.  Corben’s art is in fine display here and shows once again why he became such a popular and influential artist.  The worst aspect of this adaptation might be the incessant attempts to make sense of everything.  In Hodgson’s own novel, much is hinted at but rarely explained.  That, in my opinion, is one of the reasons it is so successful and so powerful.  The unknown is always more frightening than an explanation.

The book contains an introduction by comic book legend, Alan Moore.  Thankfully, he spends virtually no time talking about the adaptation that follows but instead about Hodgson and his work.  That Moore is a fan of Hodgson is well shown here and it is not surprising that Carnacki makes an appearance in Moore’s The League of Extraordinary Gentlemen.

The hoped-for explosion of Hodgson adaptations after this book never happened.  And, considering how little of the novel this book actually adapts, I’d say there is still need for a more faithful version.

This adaptation is apparently no longer in print but can be found through Amazon sellers (it is also available as a Kindle) and frequently shows up on ebay.