Writer(s) on the Borderland

John Linwood Grant is a madman.

A Hodgson fan, Grant has decided to dedicate the month of October to Hodgson! Every week in October, Grant will feature new material about Hodgson and his works. At first, Grant had just expected to do one or two special posts but, as often happens in Hodgson, things got out of hand very quickly!

WRITER ON THE BORDERLAND

greydogtales.com is pleased to announced the finalised schedule for this month-long celebration of William Hope Hodgson’s extraordinary fiction. A series of blog posts will be presented for your delectation, with contributions from authors and enthusiasts, along with a gallery of WHH covers and other sundries.

2 October – PART ONE: Hodgson and Carnacki

We commence with an introduction to WHH and an unapologetic nod to perhaps his best-known character, Carnacki the Ghost Finder. With comments by Tim Prasil, occult detective chronologist and author, and musings by John Linwood Grant on Carnacki and the Cheyne Walk origins of Tales of the Last Edwardian.

In which we interview the talented Wayne June, covering his narration of WHH stories and some of his other excellent horror recordings. Includes honourable mentions of related creepy audio for those who like fear and anxiety to seep in through their ears.

In which we provide an unscientific examination of those authors writing stories influenced by WHH, lead by an interview with the prolific William Meikle. We also delve into David Langford’s ‘Dagon Smythe’ parodies, Chico Kidd & Rick Kennett‘s 472 Cheyne Walk and other works inspired by WHH.

19 October – PART THREE AGAIN: More Hodgson’s Legacy
In which we delight in a bibliography of Hodgson’s pastiches by James Bojaciuk, with more coverage of authors who have drawn inspiration from Hodgson’s work.

In which we praise his originality – his weird sea stories, the Night Land, House on the Borderland and critics’ views. Features Hodgson scholar Sam Gafford on his noted involvement in the field, WHH’s publishing history and mention of others researching or promoting WHH.

In which we switch off the electric pentacle and relax with a few closing comments, including a free creepy story from John Linwood Grant and a hearty thanks to all who have participated.

Note to the Curious Reader: Everything in the schedule above is, of course, subject to change, as this is unfortunately Reality and not a work of fiction. Damn you, Reality!

Looks like it’s a good thing that there are FIVE Fridays in October this year!

I encourage everyone to check out Grant’s blog during the month-long celebration. It can be found here:
http://greydogtales.com/blog/

Now, if you’ll excuse me, I have to go and put on my tux so I’m prepared for my presentation!

Wow! Two posts in one day!  Will wonders never cease?

Actually, I hadn’t planned on doing another post but I just received an email from Tim Hutchings about his soon to be completed Kickstarter. Here’s what Tim had to say:

“My name is Tim Hutchings and I am the director of a quasi-academic game studies archive. We occasionally print books related to the collection and are currently Kickstarting a reprint of an obscure AD&D fanzine. 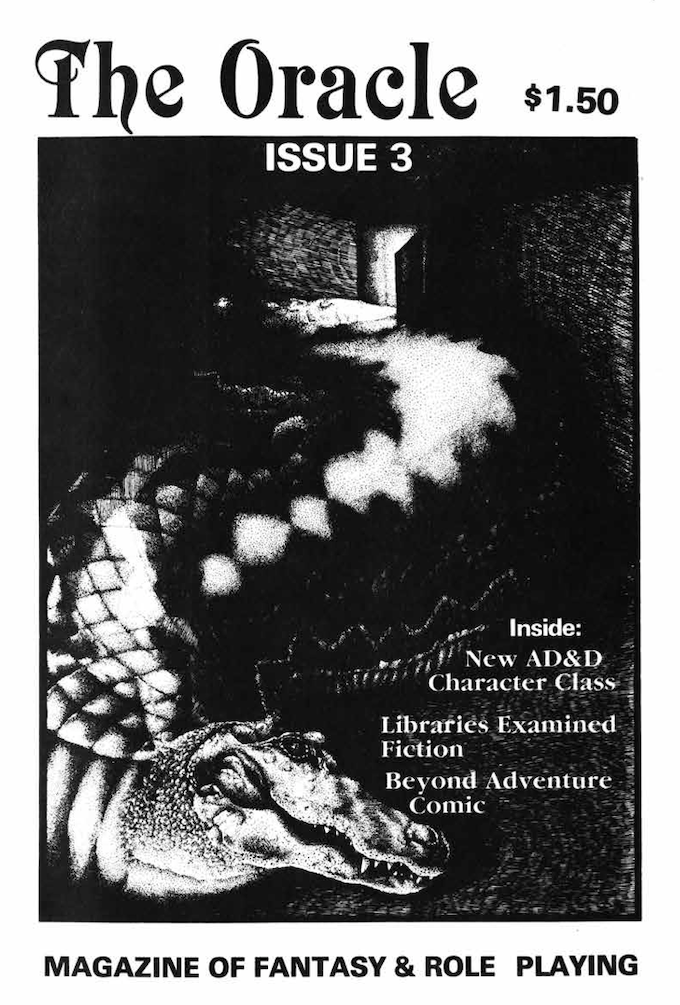 Now, without even knowing it, Tim hit on several themes that are near and dear to my heart. Hodgson, of course, but also the preservation of fanzines for future generations and study. I’ve been involved in fanzines since I was probably about 10 years old when I watched my brother, Carl, create his own comic fanzine (MINOTAUR) and run off copies on his ditto machine. Since then, I’ve published my own zines and contributed to numerous other ones and have devoured hundreds. But these fanzines were created with fans in mind and not generally meant to last. So it makes me happy that someone is doing such preservation work in the gaming fanzine field.
***
But what does this have to do with Hodgson? Well, the project is reprinting a legendary AD&D fanzine from the 1980s called ORACLE which never got to a promised sixth issue. Tim and his crew have compiled a tribute by creating that long-lost, never-realized sixth issue with new articles, campaigns and, more important to the Hodgson fan, an article by Sandy Petersen that creates rules for CALL OF CTHULHU scenarios in Hodgson’s Night Land!
***
If you’ve ever played the CALL OF CTHULHU rpg, then you know who Sandy is and how important he is not only to that game but gaming as a whole. Having him write this article is about as authoritative as it can get. It’s been many years since I’ve adventured in a CoC campaign but I’m seriously tempted to do so once more!
Courtesy of Tim, here’s a snippet from Sandy’s upcoming article:

In the novel, the nameless hero carries the mighty Diskos weapon – which seems to be a kind of circular saw on an extension – sort of a cross between a chainsaw and an axe. It might be the only weapon able to fight off the dreadful creatures he faces.
This device is a hand-to-hand bladed weapon. Enemies that are resistant to impaling weapons or bullets have no immunity to it. However, foes which are straight-up resistant or immune to physical weaponsdo receive their normal benefits. The Diskos is electrically powered, and shoots off sparks when overcharged.
The Diskos contains an internal battery which holds 30 power. It recharges this power over time, at a rate varying with its distance from the Earthpower, but generally around 1 point per hour. Normal blade use does not spend power.
When the Diskos is used in combat, it does a straight 10 damage, plus the wielder’s damage bonus. If the user wants to overcharge the blade, he can add 1d6 to his damage, which also expends an equal amount of Power to the roll. Normal combat use does not expend power – only overcharging. In desperate circumstances, the user can spend multiple d6s to boost his total.
The overcharge can be spent after the user hits his target! In addition, the overcharge is energetic, and includes electrical and plasmatic damage – it will even hurt enemies immune to normal physical weapons (though the Diskos’s base 10 damage & your damage bonus, if any, don’t count).
Example: our hero faces off an especially terrifying monster. He has a damage bonus of 1d6, because he is large and manly. He decides to add another 3d6 to his total via overcharge, and rolls a 9. He spends 9 out of his 30 store din the battery, and he will inflict 10+9+1d6 damage (10 for the blade, 9 for the 3d6 roll, and 1d6 for his damage bonus). 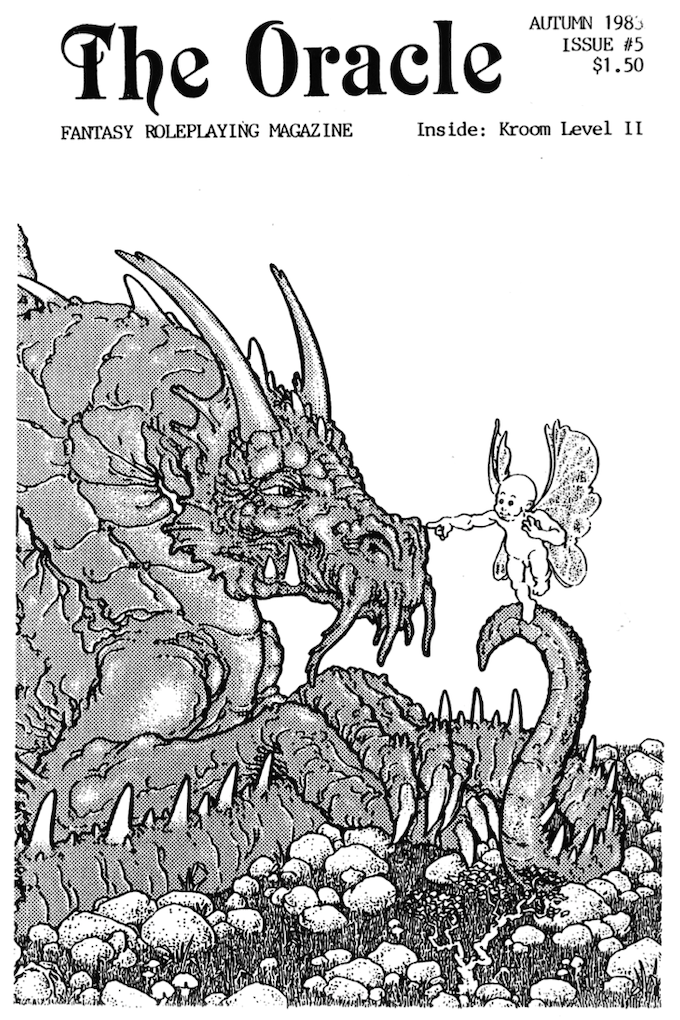 That is just all kinds of awesome and makes my fannish little heart very happy.
The Kickstarter in entering its final days and has already surpassed 100% funding so it is going to happen. If you’re into gaming at all, I suggest you click over and check out the campaign.  It looks pretty damn good to me!
The Kickstarter page is at:
https://www.kickstarter.com/projects/timh/the-complete-the-oracleadandd-fanzine-reprint-1982

Lots of new stuff coming your way soon on this blog but wanted to take a moment to let everyone know about Brett Davidson’s new Hodgson inspired novel, ANIMA!  This was a novel that Brett had written and was in the process of publishing through Andy Robertson before Andy’s unfortunate death. It’s taken a little while but the novel is now finally available for order!

What if you could be a divinity?

What if it cost you everything?

What if you faced monsters more terrible than you could imagine?

The sun has died…

Not a planet, not a star shines n the black heavens above The Night Land.

In its midst The Last Redoubt, a vast, pyramid-shaped arcology, stands obdurate against the night, while within it the remnant millions of humanity live and thrive.  The Days of Light are less than a legend to them, mouldered to dust amidst the chaos of ancient libraries.

Outside, strange immense and malevolent entities watch – and wait.

The people of the Last Redoubt face this fate with stoicism, hedonism, heroic folly… except for two secretive orders who are making plans for survival and have found their champions, a man and a woman who will together carry the essence of humanity beyond the end of night.

But can they preserve their own humanity as well?

As you can see, this is heavily influenced by Hodgson’s own novel, THE NIGHT LAND. I’m very excited about this and looking forward to getting a copy of it myself.  It can currently be ordered via Amazon at:

It’s my hope that this may inspire an entirely new explosion of Hodgsonian fiction!