Due to the lack of primary sources, we don’t know very much about William Hope Hodgson’s family. What few biographical notes we have are generally derived from the work of Randy Everts and Sam Moskowitz. But, every once in a while, we do stumble upon something new.

Hope’s father is something of a cypher. Unlike Hope’s mother, he never makes even a symbolic appearance in Hope’s fiction. We know that he was a ‘fire and brimstone’ sort and that he apparently had many arguments with his strong-willed son. (It is, perhaps, significant to note that Hope was the only son to remain in Blackburn with his family while his brothers all emigrated.) It was Hope’s father who objected to his son going to sea and who reluctantly gave his permission for Hope to be apprenticed at the young age of thirteen after an intervention by Hope’s uncle on the boy’s behalf.

We are told that the Rev. Samuel Hodgson died quickly after a diagnosis of throat cancer. Recently, my wife (who is an amateur genealogist) discovered this news item from the Sheffield Daily Telegraph dated November 26, 1892:

This notice is significant for a number of reasons. It establishes that Rev. Samuel had been a “native of Sheffield” and was the only “surviving” son. Previously, I had not been aware that there were other siblings of the Reverend. Most important is the listing of Samuel’s education starting at St. George’s School and then to St. Bee’s College. Although it had been known that he was ordained at Lichfield, this is the first mention of who performed that ceremony. It is curious that his missionary work in England and Ireland is given such short notice here given that it involved numerous moves and parishes.

We also learn that the cancer must have advanced very quickly as he “was prostrate for several weeks before his death”. His being interred at “Salesbury Church” may be helpful if anyone reading this has an opportunity to seek out this grave and find the marker.

Presently, we are at that unenviable point in Hodgson biography where any new information will come from secondary sources like these. If anyone locates any further items of interest, please let me know so that I can share it here on this blog for everyone’s edification.

(Many thanks to Carol Gafford for finding this item and sharing it with us.)

House on the Borderland Movie!

Some time ago, I posted about a movie adaptation of Hodgson’s classic novel, THE HOUSE ON THE BORDERLAND, that was starting up. It’s been a bit of time but I’ve just heard from the people behind the project who have just began a Kickstarter to raise backing funds.

Andre Martin, the man behind the project, had this to say:

The highlights of the project this far, for the fans, would be that we are sticking meticulously close to the source material and my main goal is to do it justice.

There is no doubt that this material is visually challenging but we feel it can also be one of the most visually stunning films ever created.

There have been some Hollywood heavyweights attached to the project in the past but they all wanted a dramatically different adaption, changing characters, time periods etc. We have had a solid script for almost a decade that doesn’t deviate far from the novel at a plot level.

Creatively I do have my own interpretations but they only work to expand the character and story while adding depth and weight to their existence. Such as a backstory for the Recluse to draw from, a deepening dynamic between the recluse and the lost love. Also, I don’t think any incestuous innuendos are necessary to capture the story for the modern audience. We do develop the sister-brother relationship a bit and also even Pepper’s past.

We are in talks with two persons of note, that will be a great asset to the project including the music composer Spencer Nilsen, who can create an incredible, atmospheric tone for the film. Tom Woodruff Jr, is considering the creature design/direction, who will bring the infamous Swine Things to life and if we raise the funding, I’m confident we will secure them both.

We are aware of Echoes of the Borderland and have contacted the German music group with talks to use at least one track in the film during the “Plain of Silence” sequence. They have already agreed, years ago.

This is very much a film for the fans, because I am one.

We have arrangements with several castles in Northwest Ireland area, to film at. It is also possible that the filming to take place in the U.S. will be at an old castle, that we will end up rehabbing for an economically depressed community. When the filming is done, we will leave behind the improved structure to the Economic Development Board. Pretty much I have arranged to film most of my interior shots in LA on stateside but we will definitively take a unit to Ireland to film an authentic House on the Borderland.

I have many crew positions and talent roles filled with professionals denoting their time or working “under scale.” For the most part they are not “big names” but we have all been at this independent film game for quite a while now. They all have working experience and I trust them to work with me in bringing this tale to moviegoers.

Christopher Karl Johnson is cast as our Old Recluse and I tell you he is absolutely perfect. There will be a younger version of the recluse and his long lost love in flashback sequences.

I am thrilled to hear that this project is moving ahead. For years, I have been mystified at the fact that Hodgson has not been adapted more for films, TV or comics. At last we will get an adaptation that promises to stick close to the actual book. The possibility of filming in Northwest Ireland is very exciting and I have great hopes for this production.

Hopes, however, that will not be met unless the Kickstarter is funded. In movie terms, they’re not looking for a lot of money so I hope that readers of this blog will support this project. You can check out their Kickstarter here.
We look forward to sharing more news of the production as we learn them and hope to have a Q&A with Andre Martin here on the blog very soon.

About time I got off my ass and got back to posting regularly on this blog!

My apologies for the absence (so long of one that WordPress has actually changed their webpage!) but I have actually been pretty busy. First off, I finished a massive writing project this year that took virtually all of my focus and attention. It was the culmination of a project that I have literally spent years (decades, even) working on but had allowed to lie dormant for far too long. Spurred by my success in writing my first novel last year, I turned my attention to this and completed the first draft of a 230,000+ word novel during the final days of September. It’s not finished but it’s the closest it’s ever been to that.

Naturally, I’m beginning to get back to some of the other things I love and Hodgson was the very first on the list! I’m going to try and get back to posting on a more regular basis and am also working on some new WHH related projects for 2017.

BUT, the big news is that I am almost finished with the layout for the third issue of SARGASSO: The Journal of William Hope Hodgson Studies!  Yes, it’s taken a while (and I thank everyone for their patience) but it is nearly here. If all goes well, the issue should be available by November 15th which is, of course, Hodgson’s birthday! He’ll be 139!
I’m proud to announce the following as the contents for SARGASSO #3:

“A Particular Phase of Constructive Thought: Hodgson’s Theory of Novels”
by Joseph Hinton

“Utter Quiet in All the Land: A Recurring Motif”
by Ryan Jefferson

“The House on the Borderland: The Ultimate Horror Novel”
by Liam Garriock

“Ye Hogge”: Liminality and the Motif of the Monstrous Pig in Hodgson’s “The Hog” and The House on the Borderland”
By Leigh Blackmore

“Terminal Eden: The Last Redoubt and the Closure of History”
by Brett Davidson
Poetry

“From a Mariner on the Glen Carrig” by Charles Danny Lovecraft

“Night Land—And What I Saw”
by Charles Lovecraft

“Corpse-Light”
by Josh Reynolds
“A Hideous Communion”
by James Gracey

Looks to be about 152 pages. I think we have some really great material here and I hope everyone will enjoy it because, sadly, this will be the last issue of SARGASSO. I’m sorry to say that the amount of work involved with producing the magazine is simply too great and my schedule simply won’t allow it anymore. Still, I feel that we have done great things with these three issues and I hope that others will continue to work and study Hodgson in the future!

Here’s a sneak peek at the cover for SARGASSO #3 by Robert Knox before I put all that pesky logo and details on it: 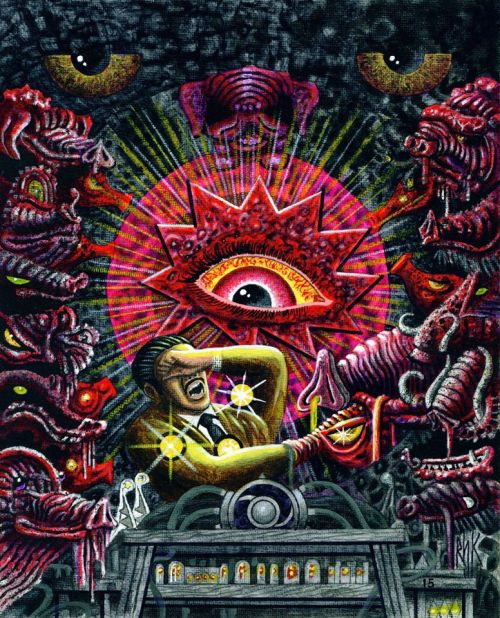 I’ve got a couple of other new Hodgson items to talk about so look for more posts soon!