Now that I’ve had some time to recover from NecronomiCon 2017 where I was on two panels and set up in the dealer’s room for three days, I can finally sit down and proclaim the inaugural Hodgson panel a resounding success!

I’m not as comfortable with public speaking as I used to be when I was younger so was a bit nervous but we had a large, enthusiastic crowd and great panelists! Unfortunately, the panel was not recorded as I think many who couldn’t attend would have enjoyed hearing it. Perhaps we’ll film the next one!

The panel consisted of The Joey Zone (as moderator), Michael Cisco, Nick Gucker, Adam Golaski and myself. Joey Z got us started with some excellent questions and Michael and Adam contributed a great deal of welcome literary analysis. I was asked to explain the Hodgson/Houdini connection which I was happy to do and maintain that it was a pivotal experience in the lives of both men. Adam Golaski spoke specifically about his appreciation for Hodgson’s characters which was good to hear as WHH often takes quite a few knocks regarding this. Nick Gucker spoke about his fondness for Hodgson’s stories and how they influenced his art as well as providing a resounding defense of MATANGO, the only feature length film to be based on a Hodgson tale. Michael Cisco discussed placing Hodgson into the context of the literary scene of his day as well as reviewing some of Hodgson’s themes and plots.

During a question and answer period, a guest asked what we thought had inspired Hodgson to write THE NIGHT LAND and THE HOUSE ON THE BORDERLAND. I rather impishly responded, “Poverty”. Although that question might have technically been correct, the questioner was looking for more discussion about what influenced WHH. Adam very ably took up the question and provided some very probing insights. The sad fact remains that, without finding more primary sources like his letters and such, much of what we say is speculation. We can make guesses, surmises, deductions but we can never know for sure. After all these years, that remains my most frustrating aspect of Hodgson studies. The man himself still eludes us.

At the end of the panel, Joey Z announced that Swan River Press will be publishing a new edition of THE HOUSE ON THE BORDERLAND with an introduction by Alan Moore and an afterword by Iain Sinclair. As if that is not enough to make one excited, acclaimed artist John Coulthart is providing the illustrations! Joey Z was supremely kind in getting a file of one of the pieces and presenting it to me on a foamboard! I will have to get a picture of it once I get it framed.

Lastly, courtesy of Todd Chicoine (the official photographer of NecronomiCon and all around swell guy), here are two photos of the panel: 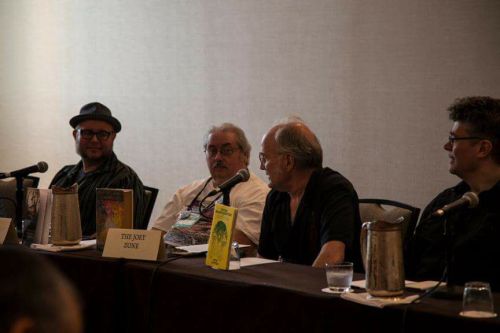 Nick has a MATANGO figure on the table before him (I was and still am very envious of this!), there’s a copy of VOICES FROM THE BORDERLAND (still available from Hippocampus Press) and my copy of the 1946 Arkham House edition of THE HOUSE ON THE BORDERLAND AND OTHER NOVELS in front of me, and Joey Z has a copy of the chapbook THE OUTER MONSTROSITIES which featured some spectacular Hodgsonian artwork from Nick Gucker!

I’d like to thank everyone who came to the panel! We probably could’ve talked for another hour as there were so many things we didn’t get to cover such as WHH’s relationship with his father, his time at sea and his war years. Maybe next time, right, Joey Z?

Sorry for the silence but I’ve been working on a number of different projects including preparing to take part in a panel about the life and work of William Hope Hodgson which will be taking place at Necronomicon Providence next weekend!

This is the first Hodgson panel at Necronomicon and it promises to be a great one. Here’s the description from their website:

WILLIAM HOPE HODGSON: AN APPRECIATION – Omni 2
Now considered to be one of the founding fathers of both science fiction and weird literature, Hodgson died relatively unknown during the close of WWI. His work would go on to be hailed by such writers as Lovecraft, Clark Ashton Smith, Lovecraft, Ellery Queen, and others. During his life, Hodgson sailed around the world seven times, rescued a crewmate from shark infested waters, chained Houdini, and was one of the first to photograph storms at sea. Today, he is widely known as the author of four groundbreaking novels and often anthologized short stories. Learn more about this fascinating man, his life and his work at this panel featuring some of the foremost Hodgsonian experts.
Panelists: Michael Cisco, Sam Gafford, Nick Gucker, The joey Zone (Moderator)

The panel takes place on Sunday, August 20th, at 1:30pm. It’s going to be a great time so if you’re going to be at the convention, please come and listen to me ramble on and on until someone has the good sense to shut me up!

I make very few public appearances these days and will likely make less in the future so if you do have any interest in hearing me talk about Hodgson, this will be your best chance!

Hope to see you there!

(Btw, here is the link to the website for Necronomicon Providence so you can check out all their other great programming: